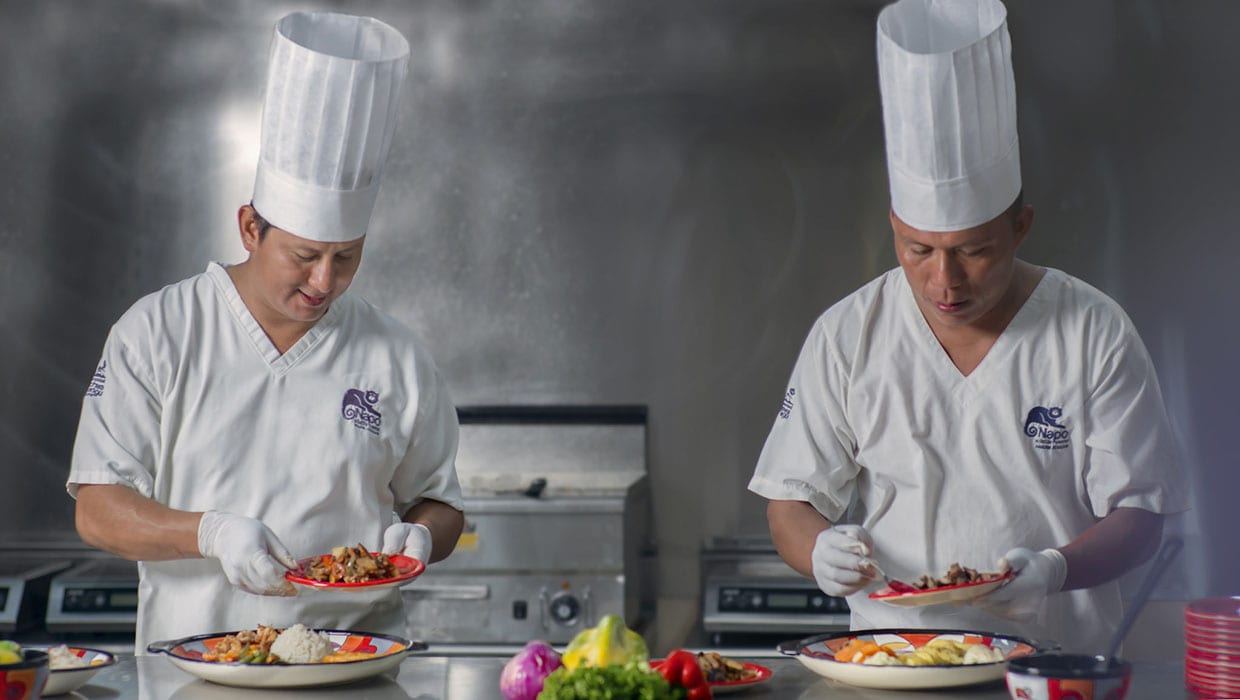 Ecuador Amazon Basin lodges are built with comfort in mind. In far off locations found on lagoons up tributaries of the Napo River stand structures that are made to blend in with their surroundings.

Within these walls are creature comforts that lend themselves to telling tales of adventure with fellow explorers. Bars overlook stunning scenery, observation towers welcome the sunrise each morning, and dining rooms await each day for travelers to gather before and after jungle trips that engage the senses in new ways.

Food in the jungle at Ecuador Amazon Basin lodges is a departure from the past in the jungle. Traditionally, people ate what they could find, hunt or grow. Yucca, wild game such as tapir and turtles, and fish are staples in indigenous people’s diets here.

Across Ecuador there is a new culinary movement that is reviving the bevvy of ingredients found in the jungle. Chef’s menus include dishes that put new twists on traditional Ecuadorian recipes, and the people of the jungle have found new inroads toward making a sustainable living while protecting the wonders of the jungle.

Fruits, roots, and soups are staples found in abundance in the Oriente. Camu camu, aguaje, arazá, cocona, borojo, and chonta are fruits used to flavor. Palm hearts are used in ceviche and salad, and wild ferns take their place at the table as a vegetable that tastes like asparagus. Yucca is used in bread, in place of potatoes, and in chicha-the traditional drink of the indigenous local people. 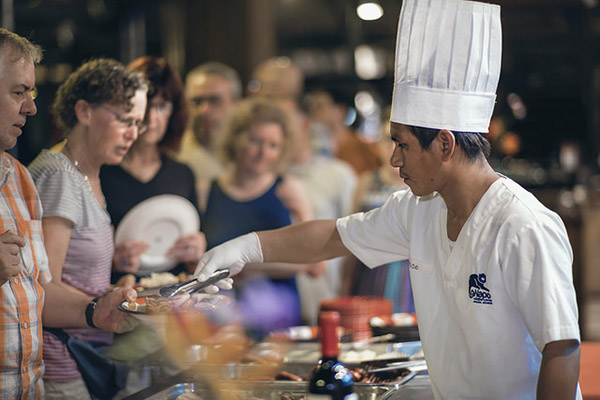 Farm to table is the way of the wild here-vegetables grown in raised beds sit next to main dishes created using free-range meat and fish.

At lodges like Napo Wildlife Center and Sacha Lodge, chefs use ingredients grown locally. Both places have ties to neighboring communities-and these partnerships are win/win arrangements where food is grown for gourmet kitchens and the lodges help the communities in return.

Chefs at these retreats and their staff are members of the same communities that grow the food. Their backgrounds open up guest’s palates to traditional recipes, and their skill introduces an international fusion of food that leave few wanting at mealtime. Keep reading for some of the traditional foods that Ecuador Amazon Basin lodges use as inspiration for their menus.

Ecuador does soups well. Caldo de Barga is a specialty of the jungle- using catfish, tree tomatoes, yucca, garlic, and spices. This hearty dish bursts with flavor and nourishes the body and soul after a day romping through the fertile forests underneath the canopy. 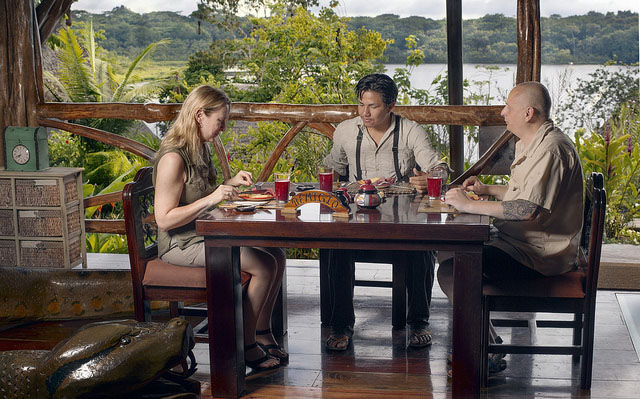 Made with fish or chicken, maito is a dish that is found all over the jungle-from the tables of luxury lodges deep in the forest to stalls of markets in gateway cities like Coca and Tena.

Meat is salted, placed on a bijao leaf with a mixture of mashed yucca, plantains, tomato, onions and spices and then wrapped and roasted over an open fire. The bijao leaf adds a savory flavor to the dish that is often served when visiting indigenous communities on day trips from Ecuador Amazon Basin lodges.

Guanta is a large rodent found in the jungle. Like cuy  (gunea pig), found in the four regions of Ecuador, it’s also food!  Used in a typical jungle dish-guata is stewed with beef, tomatoes, veggies, and spices and then served with rice and yucca. 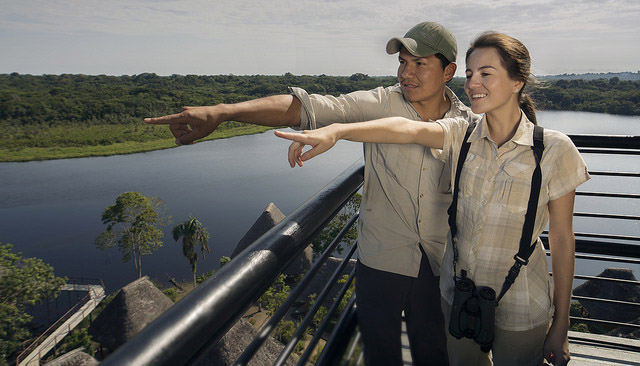 This tasty dish has made its way into fine dining rooms in the restaurants of Ecuador’s cities. Paiche is a large freshwater fish that is stewed, grilled, or baked. Neapia is a specialty of the jungle. Kichwa communities up and down the Napo River have their own distinct recipes-made with yucca juice and hot aji peppers, another staple of the jungle. The paste accompanies most meals, and chefs across the country are using it in sauces that liven up the mildness of the fish.

There are thousands of different kinds of fruit and fish in the jungle-and amid the 80,000 species of plants are spices that chefs at Ecuador Amazon Basin lodges creatively use in their menus. Interpretations of traditional dishes come in all shapes and sizes-from spicy sauces, to milder fare like palm heart salads with Amazon lemon dressings.

In addition to finding great food at the lodges of the Napo River, we also offer options for Ecuador Amazon Basin cruises, where chefs find creative ways to showcase the ample ingredients of the Oriente. For more information about taking an adventure into the deep jungle of Ecuador, contact a member of our team.