Diving in the Galapagos Islands

It is thought that the Galapagos Islands were once home to more than 250,000 tortoises in the 16th century, however, there are less than 10% of these numbers living there today. One of the problems for the Galapagos giant tortoise was the fact that they provided an excellent supply of food for whalers and pirates. This is because they could live for months in dark conditions without food or water, so could be transported by boat and eaten later. At their lowest point, numbers of giant tortoises fell to just 3,000 during the 1970s. This was caused not just by humans killing tortoises, but also due to the introduction of animals like rats, goats and pigs. These animals threaten the food supply of the giant tortoise, and its eggs. The population of the Galapagos giant tortoise is today estimated at just over 19,000. However, the species is still described as vulnerable due to the risks it faces. 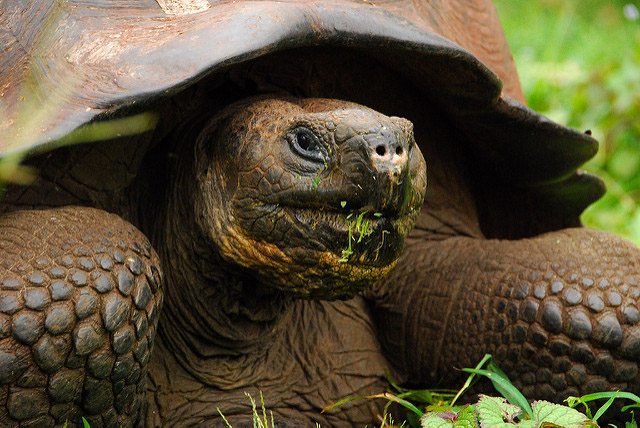 Recognizing a Galapagos giant tortoise is easy. These massive beasts grow to an average size of 1.2 meters long. They typically weigh 250 kilograms, though very large creatures have been found that weigh 400 kilograms! They are known for their slow-moving behavior, and in fact they move so slowly that sometimes lichen grows on them. The giant tortoise is instantly recognizable due to its very large brown shell, small head and long neck. They keep growing for decades, and are typically about four feet high. Some can live for more than a century, with the oldest recorded individual estimated to have reached about 150 years in age.

The Galapagos giant tortoise leads a fairly placid life. Vegetarian, it eats leaves, grass and cacti. It can consume 36 kilograms on a daily basis, but does not need to every day. It enjoys lazing in the sun. It likes to sleep more almost 16 hours a day. Indeed, the giant tortoise is only active for between seven to nine hours a day. As it has a very slow metabolism and can store a lot of water, it can easily live for a year without food or liquid. Tortoises like to come together into loose groups for foraging. Today tortoises are found on six of the Galapagos Islands. It is located on Santa Cruz Island, Santiago Island, Espanola Island, Pinzon Island, San Cristobal Island and Isabela Island. The hotter, drier islands with not so much vegetation tend to be the home to saddle-backed tortoises, while the cooler, wetter islands with rich vegetation are where domed tortoises are more likely to live.

Lonesome George was perhaps the most famous of all the Galapagos wildlife. Lonesome George was a giant tortoise thought to be the last of his subspecies, who lived to approximately 100 years old – though not everyone agrees on his age. George was a Pinta Island tortoise, and it had been hoped that more Pinta tortoises could be found so that he could breed, however, none was found. A sizeable reward was even offered to find Lonesome George a partner. Further attempts were made to help George to breed by placing him with two female giant tortoises, and he did indeed mate with one of these in 2008. However, the eggs that resulted proved to be inviable. The same problem occurred in 2009 with one of the female companions. However, ultimately Lonesome George failed to breed in captivity and he died in June 2012. After his death, George was preserved by taxidermists in the USA, and since 2017 has been on display at the Charles Darwin Research Station. 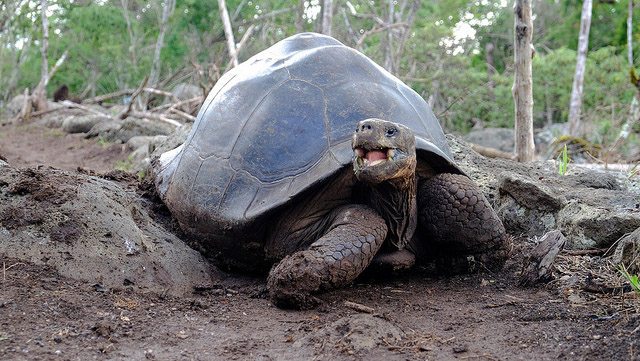 Visits to see Galapagos giant tortoises most frequently happen on Santa Cruz Island. At Puerto Ayora, giant tortoises can be seen in captivity at the Charles Darwin Research Station. This center is dedicated to conservation. The Charles Darwin Research Station in the Galapagos Islands is working to try and increase the population of giant tortoises, particularly since many subspecies are at best, endangered. The Research Station is running a captive breeding program which is having positive benefits in this area. You can visit the Research station from a cruise, quite a few cruises include this visit in their itineraries such as the Cormorant Galapagos yacht which visits not only this station but a few others during their routes.

Another common place where Galapagos tortoises are seen on Santa Cruz Island is in the highlands. Visits to farms in the Santa Cruz highlands offer a great opportunity to spy Galapagos giant tortoises living in the wild, in their natural habitat. The farms are quite muddy, which the tortoises appear to enjoy. They can be spotted lumbering around fields or resting among the thick lush vegetation. In the highlands of Santa Cruz, sometimes a giant tortoise can be seen lumbering across the road. If you want to be certain that you can see this amazing form of Galapagos wildlife, it is best to check that your Galapagos cruise or land-based tour option will include a chance to spot the tortoises, as not all options have this on their itineraries. At Ecuador and Galapagos Insiders we can help to make sure that you pick a tour that includes the chance to see these giant tortoises in the wild, or in the Charles Darwin Research Station, or both. 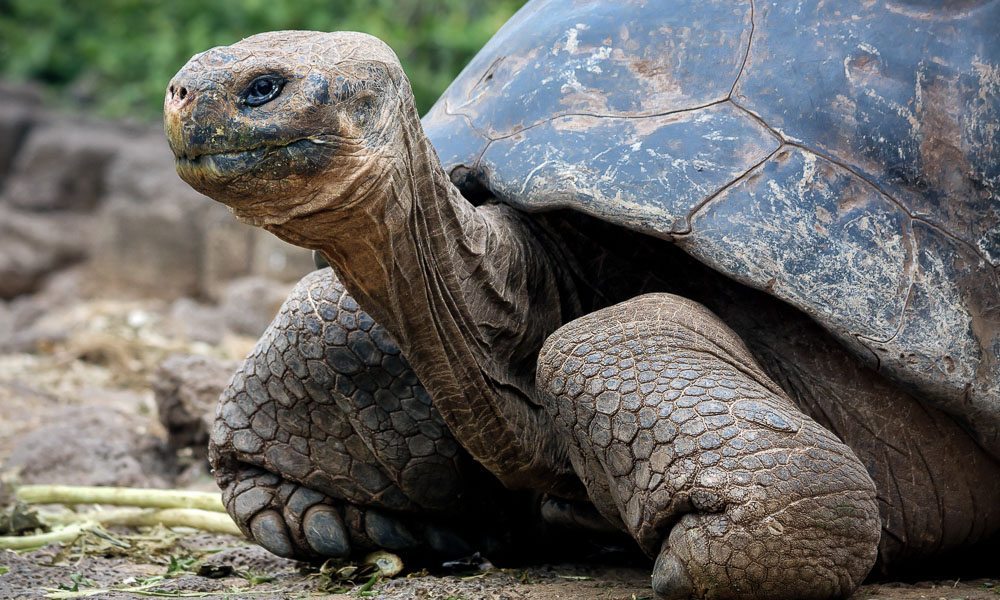