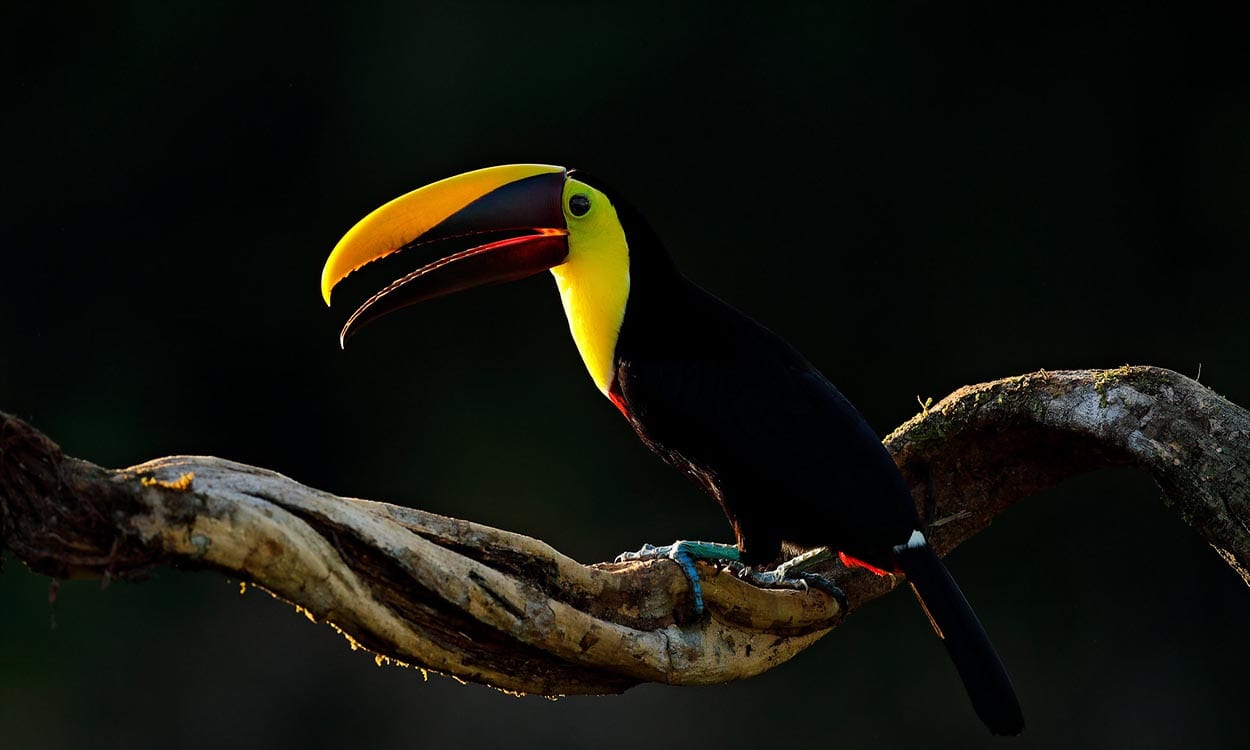 Amazon Basin Wildlife – All the Main Species to See

If you’re planning a trip to the Amazon jungle in Ecuador, you might be wondering what species you might get to see there. Rest assured, the Amazon Basin in Ecuador is a great place to visit to see jungle wildlife. There are many Ecuador rainforest species, from birds, to frogs, snakes, monkeys, armadillo and caiman, among others. Here we will consider where you can see the main species of the Ecuadorian Amazon, and when to see them. We will also highlight the main species, and we will provide our Ecuador and Galapagos Insiders recommendations for wildlife spotting during your Amazon Basin trip

When you can see wildlife in the Ecuadorian Amazon Basin

The great news about the Ecuadorian Amazon basin is that it is teeming with wildlife all year around. That means that it doesn’t matter what time of the year you take your trip. You are very likely to get to see a range of wildlife, birds and plants. One point to note is that in the rainier season, there is generally slightly more wildlife as rain is what brings about life here. Rain brings more creatures into the ecosystem, and more plant life, which means more food for other creatures. Since it rains here all year around, if you can, from a wildlife perspective you might want to visit during the rainier period. The rainy season runs from the end of February to the end of July. But don’t be too concerned if you end up going outside of that time, you’ll still be likely to see plenty.

Where to see wildlife in the Amazon Basin

There is wildlife all over the Ecuadorian Amazon, so there are plenty of places to go and visit. You can access Ecuador jungle lodges from Coca, Lago Agrio, Tena and Misahualli. Some of the best wildlife experiences can be gained from visiting lodges near Coca and Lago Agrio, as these are deeper into the jungle. 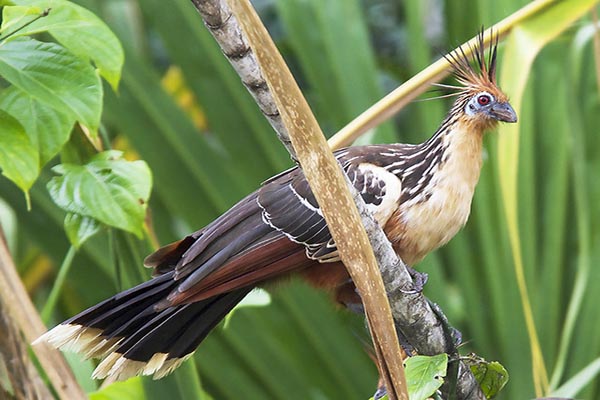 Main Species You Can See

Pumas live on their own, and they do their hunting during nighttime hours. You are unlikely to see a puma, but you might see tracks. They feed on monkeys and birds, as well as larger creatures such as armadillos and capybara.

There are relatively few jaguars in Ecuador, but some do still reside here. You will be unlikely to see one of these beautiful creatures, as they are well camouflaged and tend to stay away from people. They are good swimmers, hunters and climbers.

Aside from insects, monkeys are one of the creatures you are likely to see the most of during your trip to the Ecuador Amazon Basin. There are believed to be around 150 monkey species. One particularly interesting one is the pygmy marmoset, which is the smallest type found in the Ecuador amazon. You might also see a squirrel monkey. These are larger, with brown fur on the head and shoulders and yellow on the back, with black and white face fur.

At up to four feet in length, the capybara is the biggest rodent to be found anywhere worldwide. These creatures like to live in groups, sometimes made up of as many as 30 creatures. They eat massive amounts of grass, and are fond of water, tending to be found in areas of swampy land.

The tapir is a large mammal that is found in the Amazon. It is a gray like color, and it has a long snout. Tapirs can move surprisingly quickly, both on land and in the water – they make great swimmers and divers. The South American tapir has a plant-based diet.

There are numerous species of snakes in the Ecuador Amazon basin. Perhaps one of the most famous is the anaconda. The largest of this species can grow up to 17 feet in length, however, there are also smaller species. Anacondas and other snakes tend to eat fish, birds and small mammals. While there are some venomous snakes in Ecuador, it is unlikely you will experience any issues. 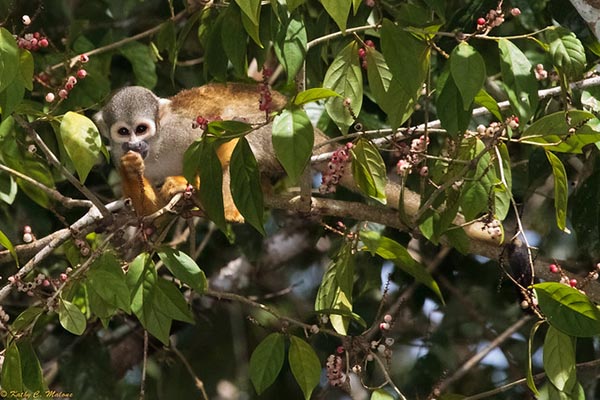 There are quite literally thousands of species of insects in the Ecuador Amazon Basin. You’ll be most likely to see ants, and mosquitos. However, you may also come across different species of beetles, flies and caterpillars as well. There are also many species of spider. The best known is perhaps the tarantula.

Ecuador’s Amazon is home to more than 1,000 frog species. These amphibians are very common, though they are typically nocturnal, so you are more likely to see them at night. Some frog types are poisonous, as a mechanism against predators.

The birdlife in the Ecuador Amazon Basin is amazing, and there are more than 500 species registered here. Species that you may see include woodcreepers, parrots, hummingbirds, parakeets, toucans, hoatzins, herons, manakins, yellow-billed terns and palm creepers. Rarer birds found here include the scarlet macaw and scarlet-shouldered parrotlets, but there are many more.

Armadillos are mammals. They have a shell that is bony and armored. The giant armadillo in particular is quite a sight, and it can reach up to five feet in size. The armadillo is generally nocturnal, but occasionally you will see them during the daytime as well.

While people are fearful of caimans, they usually do not harm people, as they are typically rather small. The black caiman is the exception to this, as it is big enough, but it tends to prefer other creatures. They can grow up to at least 16 feet long. They like slow moving rivers, and they are carnivorous.

There are various species of piranha, which can be anything between five and ten inches long. Piranhas are omnivores that live in packs, and they do this for self-protection. The movies have made piranhas infamous, but you won’t get eaten by one of these fish. In fact, piranhas will only eat flesh that is dying or dead.

The Amazon river dolphin (also known as the pink dolphin) has a pink-ish tinge to its skin, and a long snout. It likes to feast on fish and turtles. These creatures are seen in the waterways near lodges with some frequency, and they have a sort of mythical status around them. 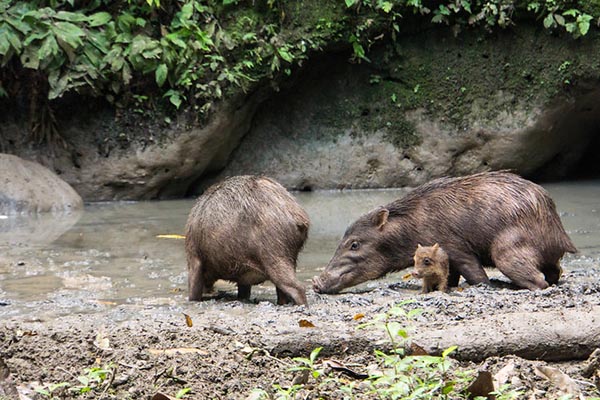 Insider Recommendations for wildlife sightseeing during your Amazon Basin Trip

The wildlife you will see in the Ecuador Amazon Basin is exactly that – wild. This means that it will not necessarily be up close and personal. It may be high in the trees overhead. Our main insider recommendation for wildlife sightseeing during your Amazon Basin trip is to take a decent set of binoculars so that you can get a better look. Your guide will have some but having your own will mean more time for you to look. Also, listen carefully to your guide’s instructions, to make sure you stay safe.

We can help you plan your wildlife spotting trip of a lifetime to the Ecuador Amazon Basin. To learn more about the trips we can offer contact Ecuador and Galapagos Insiders today. We are Ecuador experts and you can be sure we’ll find you the right trip for you.