Characteristics of the Galapagos Nazca Booby

The Galapagos Nazca booby does not have the bright red feet of the red footed booby, nor the surprisingly blue feet of the blue footed booby. Instead it has feet that are of a rather muted color, which is blueish gray. However, this does not make it any less interesting to observe, and it quite stunning to look at. Importantly, this species is often confused with the masked booby, but it is distinct.

The Galapagos Nazca booby is the biggest of the different booby species that are found in the Galapagos Islands. The female bird is larger than the male. It has a mostly white body, but the end of its tail and its wings are colored a dark brown to black color. The bird has a black mask over its eyes, which makes it quite distinctive. The bill is usually a bright orange color for males and an orange-pink color in females. 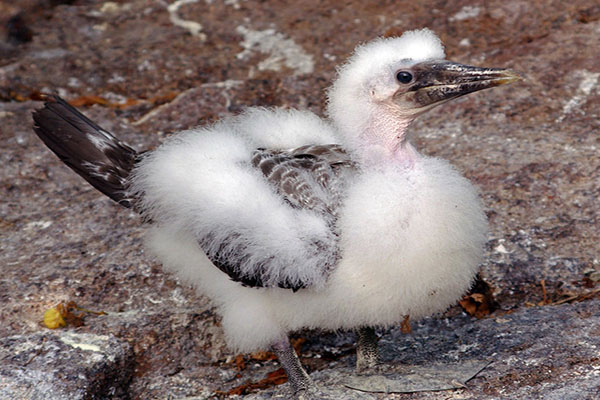 The Nazca booby makes its nest close to the cliff, often on rocky ledges. It prefers to nest in patches of ground that are bare, where there is no vegetation cover. The first stage of the reproductive process is when the male selects an area for his territory. Following this he will defend his land and then start with courtship activities to attract a female. The courtship process is particularly interesting for the unique dance the male does to attract the female. He points his beak at the sky. The female copies this movement, and it is thought that the purpose of the dance is to show the situation of the planned nest.

Once the partner has been chosen, the nest is built. This is comprised of a ring- shaped area that will be demarked by guano. When the two have mated, the female will lay a small number of eggs. This will usually just be one or two eggs. The eggs are kept warm by the feet and the breast of the Nazca booby, and both parents will take responsibility for keeping the eggs warm during the nesting time. Only one chick is expected to survive, even if both eggs hatch – which is relatively unusual. If two do hatch then the first chick to hatch will be aggressive towards the second, and this will lead to the later chick not being able to feed, so it will ultimately die of starvation in some situations. In some cases, it may even remove the second chick from the nest. Once the weaker chick is pushed from the nest, the parents will no longer acknowledge it. Again, it may die of starvation, or alternatively from the cold or from being captured by predators. This practice of seeing off a sibling is known as siblicide.

For its food, the Nazca booby likes to eat small fish. It will dive at a very fast speed to collect its food from the sea. It will dive from a height of as much as 30 meters to catch its prey, and it hunts in the waters just around the islands. It prefers to feast on pilchards, but it will also eat other items such as anchovies, squid and flying fish. The female of the species is more likely to dive deeper for food and will eat larger fish than the males.

Where to see the Galapagos Nazca Booby 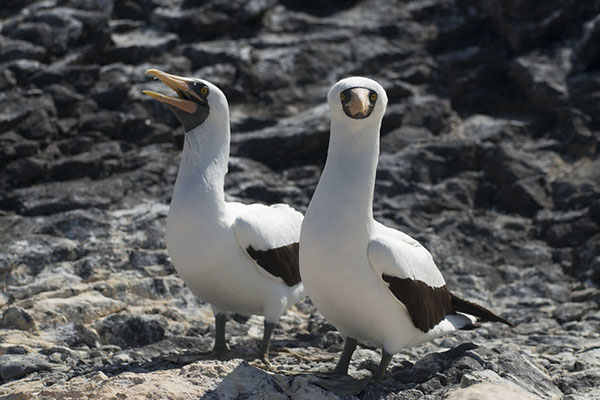