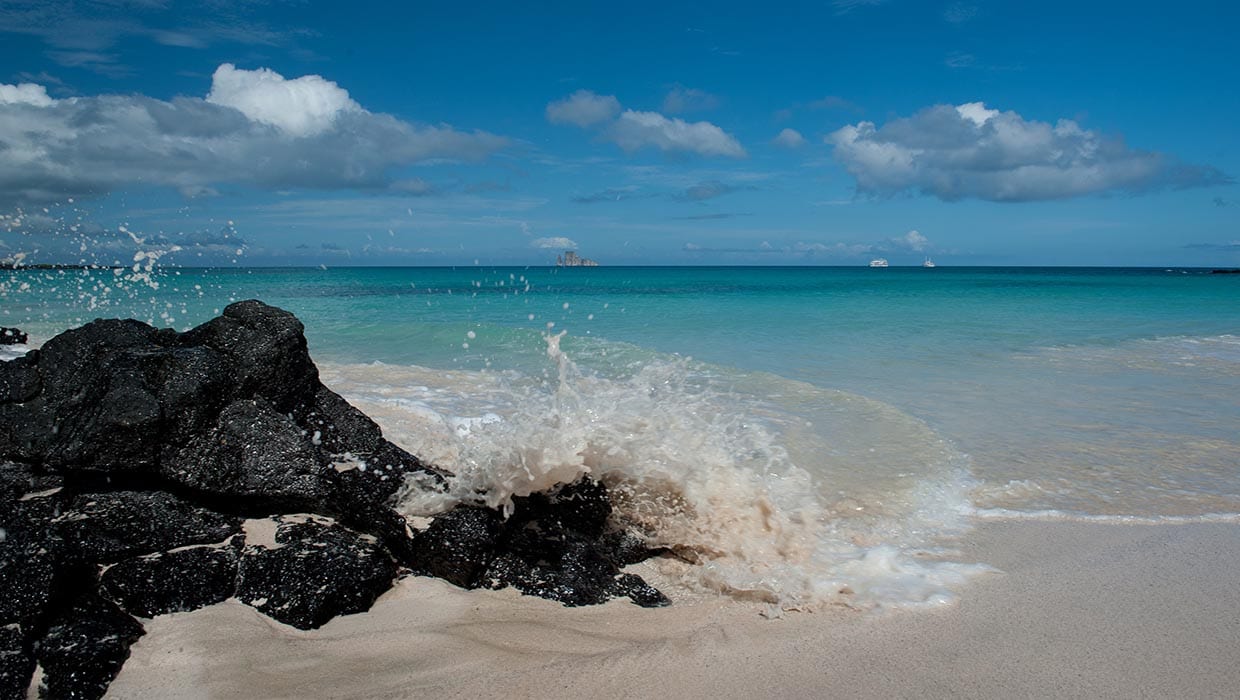 The Galapagos Islands have captured the hearts and imaginations of travelers for centuries. The barren, volcanic landscapes are contrasted by a vast diversity of wildlife found both on land and beneath the sea.

The Galapagos natural history is a story that is measured in millions of years, when underwater eruptions built up lava repeatedly until islands formed on the surface. The Galapagos hotspot, on the western side of the islands, is still active-causing eruptions on Isabela and Fernandina in the recent years that are continually reshaping the islands. Sierra Negra on Isabela and the Fernandina volcano on the neighboring island erupted in 2018.

Fernandina is the youngest in the Galapagos Islands, around 30,000 years old, the others to the east are the oldest, having moved away from the hotspot inch by inch. South Plaza, 4.2 million years old, and Espanola, 3.2 million years old- are the oldest in the archipelago. Keep reading for some of the places you can visit that show the Galapagos natural history when exploring the islands.

When not erupting, travelers in the Galapagos Islands can hike up to the crater of Sierra Negra, one of the six volcanoes that formed Isabela. Passing through forests to lava fields above the treeline, on a clear day the neighboring islands appear on the horizon, while steam rises from the 6-mile diameter caldera. It’s the second largest on the planet, and lava flows from recent activity and the different colored formations are striking reminders of how these islands took shape and the Galapagos natural history. 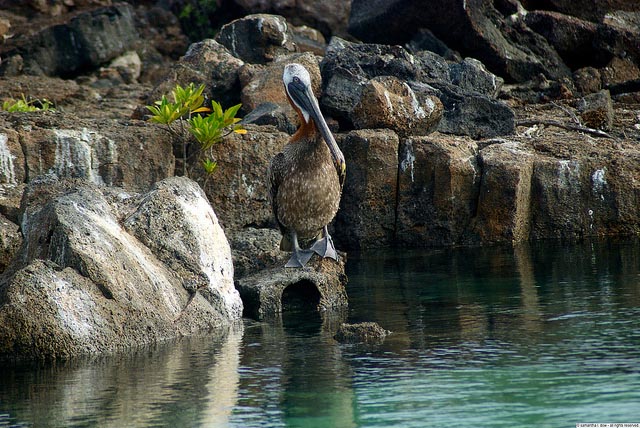 Los Tuneles is a favorite of snorkelers in the islands. Only reached by day trip, it was formed millions of years ago by a volcano erupting that left a complex of natural volcanic bridges overlooking clear pools. The landscapes are as fascinating as the creatures in the waters and on land, including sea turtles, sharks, and blue-footed boobies. This trip is available as the weather of the islands dictates, and ultimately it is up to the captain of your boat if the narrow entrance to the pools is safe to traverse.

Lava tunnels in the highlands of Belavista on Santa Cruz, and behind Post Office Bay on Floreana Island give you a front row seat to the Galapagos natural history and the formation of the islands. Descending into the ground by way of metal ladders, the tunnels extend into the earth.

Formed when ancient volcanoes erupted lava flows underground acted as earthworms of sorts. The upper crust cooled, while the molten lava below continued towards the lower elevations; leaving different spectrum of colored lava in its wake.

Exploring the lighted walkways through the tubes gets tight at times, only to open up into cavern-like underground chasms.

Los Gemelos, also in the highlands of Santa Cruz island, are two massive collapsed magma chambers that are now home to a scalesia forest and many of Darwin’s finches. There are paths that circumvent both of the chambers, making way through the forest where the birds of the highlands are spotted in the trees before flying off into the distance.

Devil’s Crown is considered by many to be their favorite snorkeling spot in the Galapagos Islands. It’s a submerged crater that brings sea lions and turtles, white-tipped reef sharks, eels, rays, and hammerhead sharks.

The inner pool is surrounded by the ring of the crater, where sea birds perch and circle in search of the reef fish that swim in the waters below, a clear sign of how millions of years ago the erupting volcanoes gave shape to this island and its geographic dramatic land-space.

The oldest and most isolated of the Galapagos Islands, Espanola is home to the largest colony of the waved albatross in the world.

Its natural attractions extend under the water to Gardner Island and Tortuga Rock. Underwater caves are fun sites to explore while snorkeling and diving. White-tipped reef sharks, rays, and bump-head parrot fish are often seen amid the volcanic caverns formed millions of years ago. 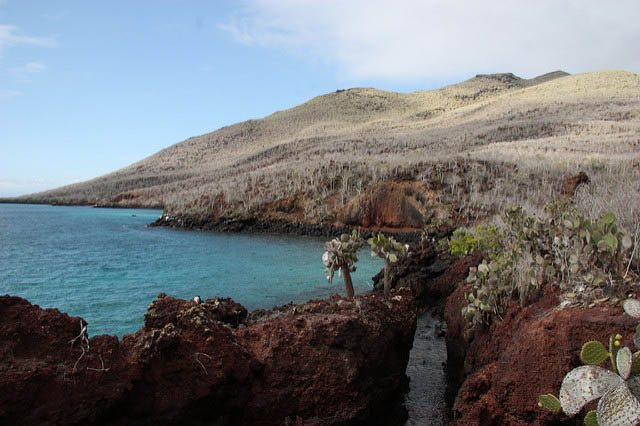 Bartolome Island and the majestic Pinnacle Rock in its bay are some of the most recognizable icons in the islands. Seen in the movie, “Master and Commander,” its landscape has an out-of-this-world quality about it. Volcanic cones rise from the ground, while multicolored lava fields flank a wooden boardwalk that leads to a high vantage point overlooking the bay below.

Pinnacle Rock, now a popular snorkeling site that is home to Galapagos penguins, is the result of an underwater volcano erupting and exploding to the surface, an important part of the Galapagos natural history. One Galapagos history fact about the rock is that it was used as target practice by the United States military during WWII when they were stationed in the islands.

Santiago Island is the site of one of the best Pahoehoe lava fields in the islands. While most of the lava formations you find during your travels in the Galapagos are sharp and brittle, the fields here are ropy with intricate patterns and designs.

Santiago is also one of the few places in the archipelago to find the Galapagos fur seal, and is home to a red volcanic beach that is typically the first landing site that travelers visit. 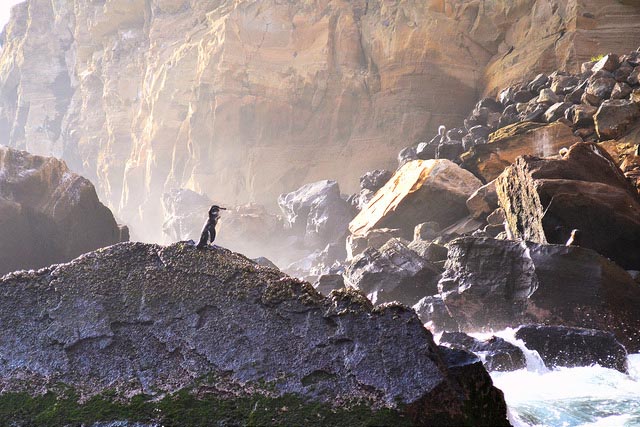 The Arrival of the Species

An often asked question about the Galapagos natural history is how the animals arrived to an isolated chain of islands hundreds of miles off of the Ecuadorian mainland.

What can be said of the animals of the islands is that the geographic landscapes and events there shaped their development. The different subspecies of Galapagos tortoises on Isabela Island adapted because lava flows of the six volcanoes blocked them from accessing parts of the island.

The Galapagos Islands are an unbelievable place to explore. The animals take center stage, and rightly so, but the backdrops to their performances are just as intriguing, bringing new horizons to the forefront. For more on the Galapagos islands history, it is also important to understand the human history and how the first habitants of this archipelago arrived here.

For more information about planning a trip to a place that sets the bar high for an adventure of a lifetime, contact a member of our team.