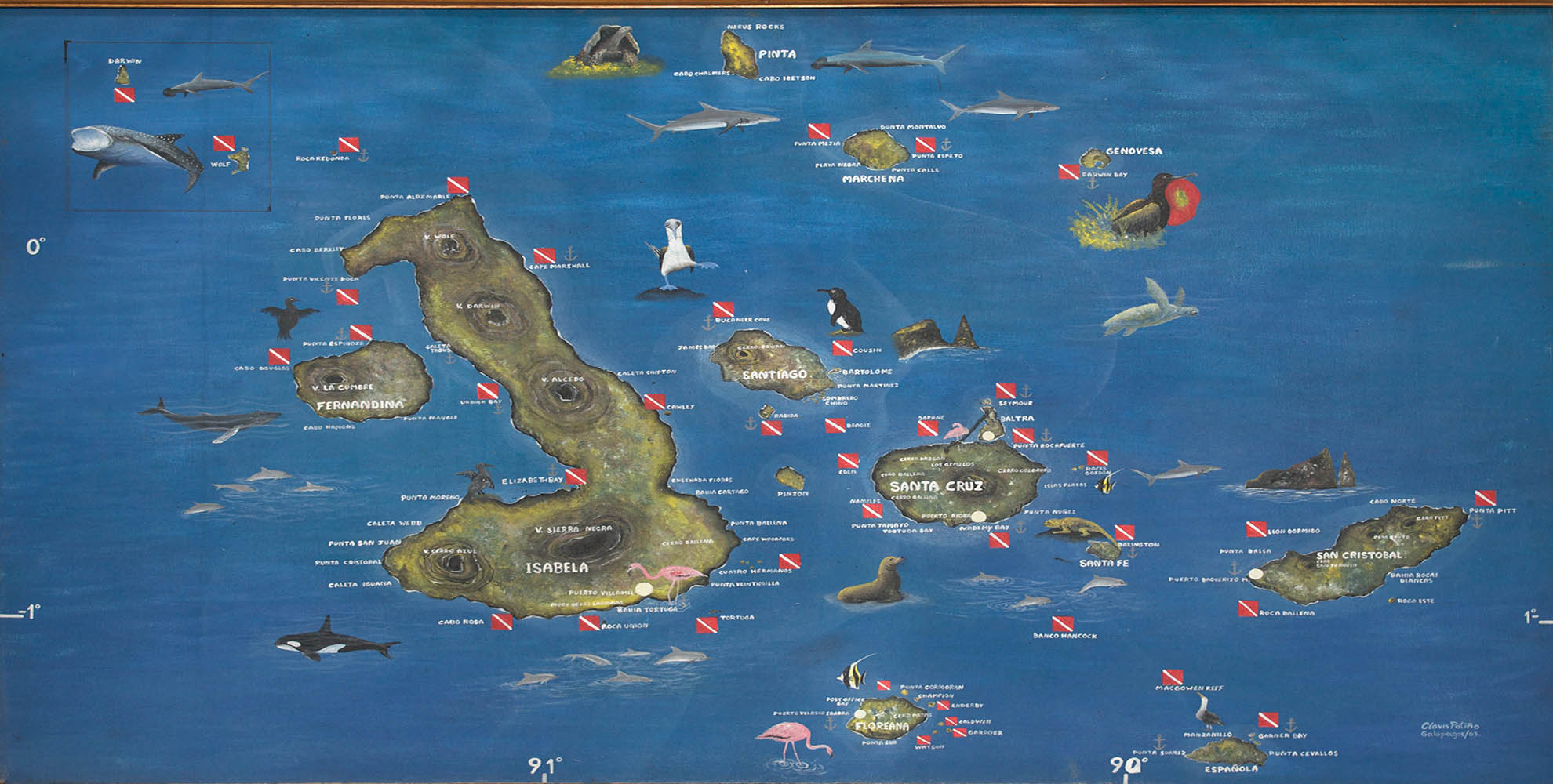 Galapagos Island maps have a long history. The Galapagos Islands were first discovered in 1535 by intrepid explorer Fray Tomas de Berlanga. Berlanga was from Panama but set off on a voyage to visit Peru to investigate violations against the local people by the conquistadors. During this early voyage, Berlanga’s ship got carried off course and he came across the islands. The islands were named after the tortoises found there by the early explorers, and even back then, the visitors reported amazement with the wildlife, which was unafraid by their presence. Over time the islands became used most frequently by pirates as a place to hide out. However, the islands did not get properly mapped until the late 16th century.

In 1570, the Galapagos Islands first appeared on the map. The map they were found on was Theatrum Orbis Terrarum, prepared by a Flemish cartographer named Abraham Ortelius. Early maps of the Galapagos Islands were not very accurate, but at least gave explorers somewhat of an idea what to expect. Of course, it is important to remember that explorers back then did not have the technology that we have today to create maps, and they were reliant on the information that they did have, such as the position of the stars. From that time on, as visits to the islands became more commonplace, the Galapagos map got more firmed up and eventually started to resemble the maps we see today. In particular, by the 1790s, whalers were making more regular visits to the islands and refining the maps. 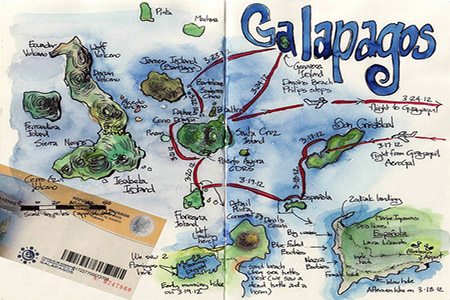 Today, maps show Santa Cruz island roughly central among the islands, so it is no surprise that many Galapagos cruises start from Puerto Ayora. Furthest to the left (west) are the islands of Isabela and Fernandina. Isabela Island is the biggest in the Galapagos, and the way it is mapped makes it look like a leg with a foot at the end of it.

This island is situated on the Galapagos map to the south east of Santa Cruz Island. On Galapagos Islands maps it is easy to two of the main points of interest on this island clearly depicted. These include Gardner Bay and Punta Suarez. Gardner Bay is a site you’ll want to see in real life and not just on the Galapagos Islands map, as it is a delightful, long white sand beach where you can laze with sea lions. Punta Suarez is an excellent spot at which to observe a variety of bird life, including the albatross at certain times of the year, and a detailed Galapagos map also depicts the blow hole which many cruise ships stop at.

Maps of the Galapagos Islands show Floreana Island practically directly south from Santa Cruz Island, and in fact, it is considered the southernmost point of the archipelago. The island is relatively small, and somewhat circular shaped on the Galapagos map. The island is essentially a volcano. One spot on this island that got onto the Galapagos Islands map pretty early on is Post Office Bay, which is located on this island. Here, whalers used to leave letters in a barrel, and other sailors and whalers passing by would look through the barrel and take letters that they thought they could deliver. The Galapagos map also shows Punta Cormorant, where visitors can enjoy seeing flamingos, rays, turtles and Sally Lightfoot crabs. The green-looking beach makes the bright pink flamingos really stand out against the landscape. 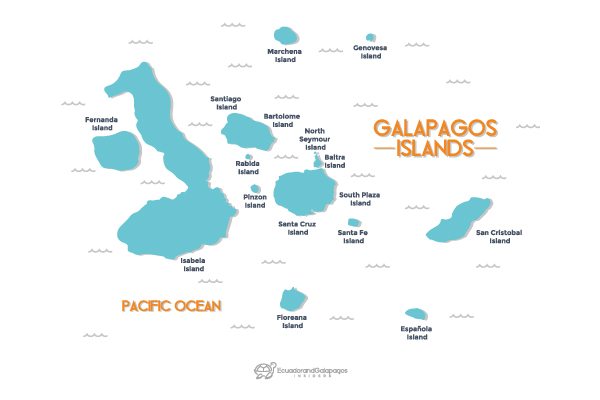 It is to the far north east of Santa Cruz on maps of the Galapagos Islands. It is shown on the Galapagos map as covering a distance of five square miles, and it is shaped like a horse shoe. As with many of the other islands here, this is because it is a collapsed caldera. What you cannot tell from the map is that this is a great place to observe various species of birdlife that are found in the archipelago. North Seymour Island is also to the north east of Santa Cruz Island, but is very close by, as shown on the Galapagos map. This means it is often visited either first or last on a Galapagos cruise, due to its relative proximity to the airport. It is a small island, and most Galapagos maps show the visitor trail which crosses the island, running for just over a mile in length. 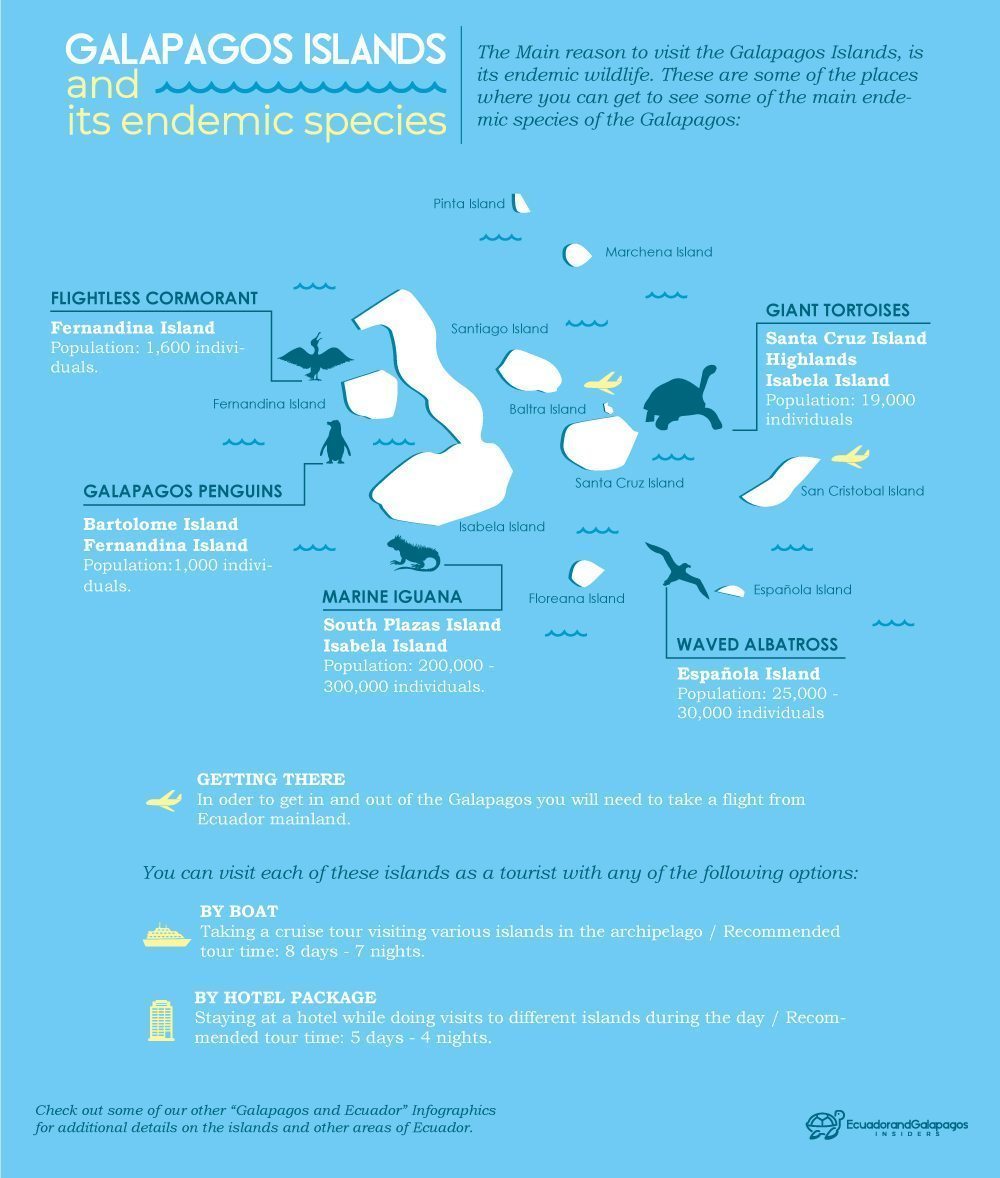