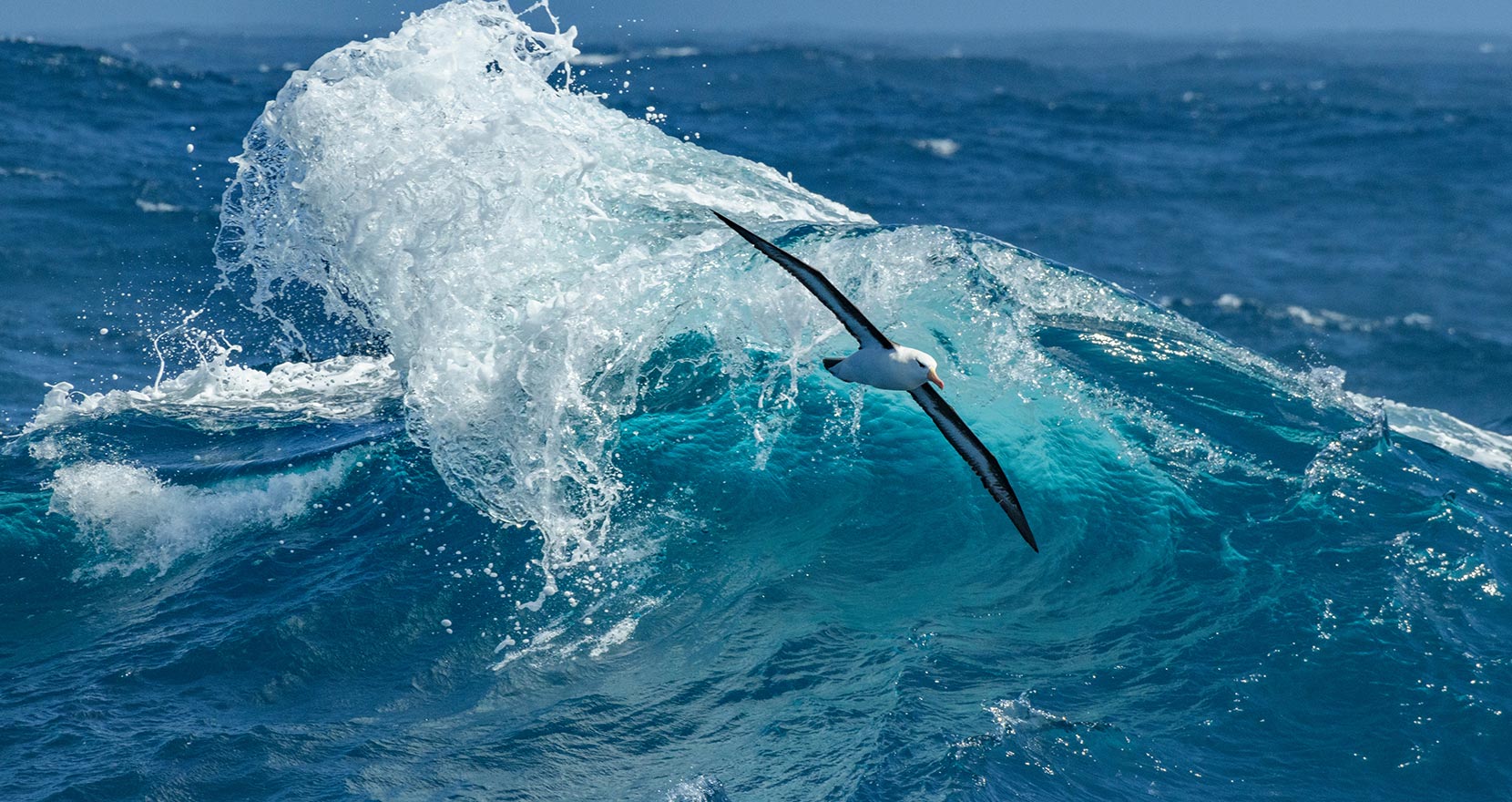 The Galapagos Islands are a birdwatcher’s dream. Even those that are not hobbyists will find the birdlife in the Galapagos Islands quite fascinating. Some birds are endemic to the archipelago and are resident all year-round, while others migrate to the islands. There are an estimated 29 bird species that migrate to this area each year. Migratory species have a variety of reasons for visiting the islands. Sometimes this may be wanting a warmer climate for the winter, while other birds simply use the islands as a refueling point on a longer journey. Many of the migratory birds seen in the islands reside in North America and in some parts of Europe. Here are just some of the finest migratory species that you may get to see in the Galapagos Islands:

The waved albatross is one of the most fascinating birds that you are likely to see in the Galapagos Islands not least because it is the largest. Its gigantic wingspan can be up to 2.5 meters long and it weighs between 2.7 and 4 kilograms. Males are bigger and heavier than females. This bird has a white head, a yellow crown and a long yellow bill, with a brown body and white breast and underwing. It has blue legs. The waved albatross can typically be found in the Galapagos between April and December, spending the rest of the year on the mainland coastal regions between Colombia and Peru. One event to look out for is the takeoff or landing of this bird, as it has a very awkward and clumsy look about it. You can see the waved albatross on Espanola Island. 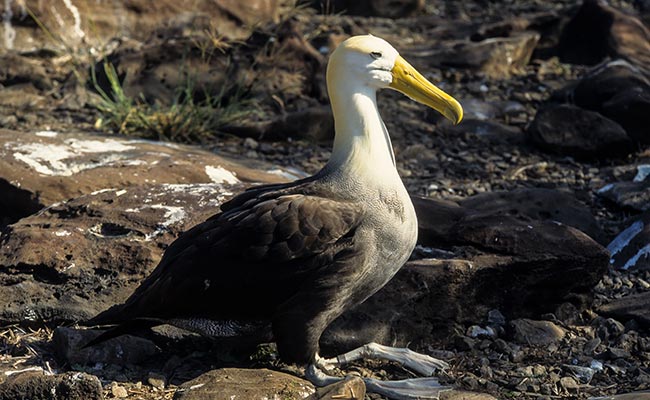 The whimbrel makes its home in Scotland and in other parts of the UK, but in the winter, it likes to migrate to warmer climes, such as Africa, South Asia and South America, sometimes migrating to the Galapagos Islands. This bird has a long beak and is usually spotted wading in shallow waters. It is distinctive for its chain mail-like brown and white feathers and its unusual call. Do not get too close to its nesting sites. If you do, it may attack you, as this bird is very defensive of its young. 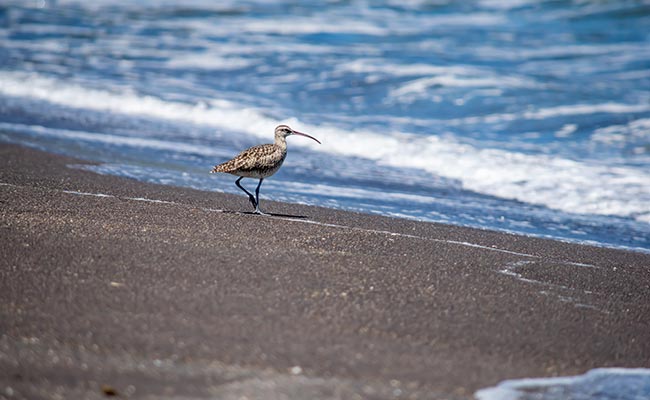 This unusual bird spends some of its time in the Galapagos Islands but much of its time at sea when it is not the breeding season. Incredibly, sometimes birds of this species remain in flight for a couple of months at any one time, and they can even sleep in flight for short periods. One of the most striking characteristics of the mating process of the great frigatebird to look out for when you visit the Galapagos Islands is the fact that the males puff up a large red pouch under their chins to a huge size, to attract females. The female is significantly bigger than the female. Look out for this bird on Genovesa Island or North Seymour. 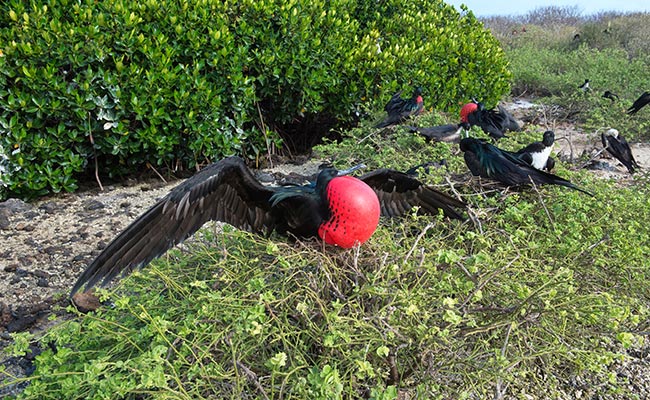 The red necked phalarope is fascinating for its tremendous migration path, with this species migrating approximately 16,000 miles to the Galapagos for the winter. The bird breeds in artic areas of Europe and North America during the summer months and seeks warmer weather later on in the year, when temperatures drop in their breeding grounds. The bird is recognizable for its brown wings, black crown and tan and reddish neck. Its habitat of preference is the shoreline, and it feeds on plankton that it finds in the water. 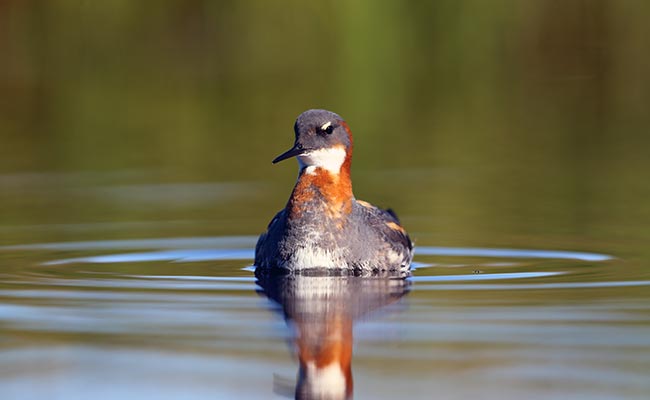 The ruddy turnstone is a bird that breeds in the artic north and heads south for summer sun once their breeding season is over. This species breeds in countries such as Norway, Sweden, Finland, Estonia, Russia, Denmark, Greenland and parts of Alaska. It has a white undercarriage, while its wings give a striped appearance with black and brown sections. Its head plumage is white and black. This is another shore bird which likes to spend its time looking for food in wet sand. It is fairly sizeable with a wingspan that can reach 57cm and adult weight can get up to 150g. 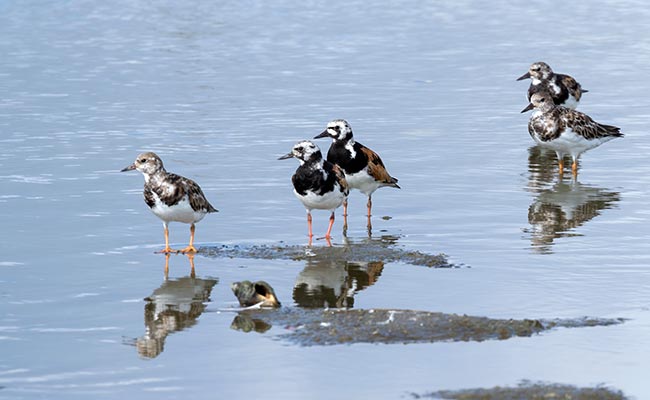 With a name like wandering tattler, it comes as no real surprise that this species is migratory. Spending the summer in Alaska, Russia, Canada and California it breeds in the mountains. As with many of the other migratory bird species in the Galapagos Islands, it heads south once the breeding season is done and its chicks are raised. It migrates not just to the Galapagos archipelago but also to other parts of South America. The bird is mostly grey, and it likes to eat marine worms and crustaceans.

Want to take a Galapagos cruise or land-based Galapagos trip?  Get in touch with us today and we can help you to plan and organize one of the most extraordinary trips you’ll ever make in your lifetime. 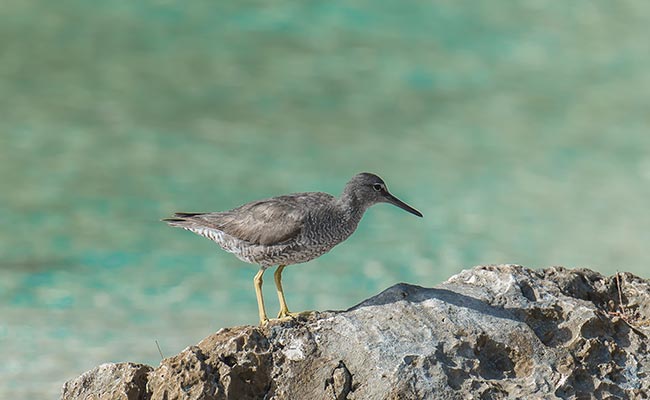