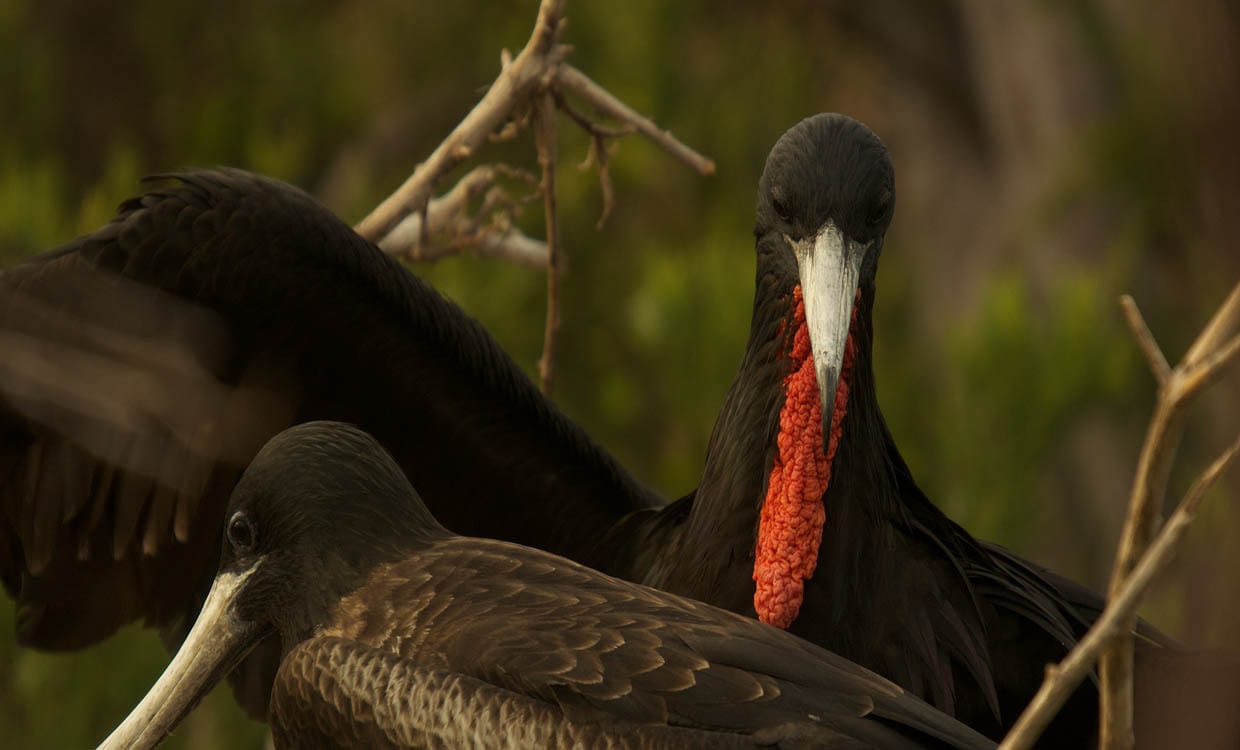 Characteristics of the Galapagos Frigate bird

There are not too many differences between the characteristics of the Galapagos frigates. They are very similar to look at in terms of shape, size and colorings. The most noteworthy difference is a slight color variation between the two. The great frigatebird tends to have a green-ish sheen in the sunshine, while the magnificent frigatebird tends to look a rather more purple color in this type of light. The magnificent frigatebird is slightly larger than the great frigatebird. The latter has larger wingspan than the former, and in both creatures, the female is bigger than the male bird. The wingspan is the largest wingspan to body weight ratio of any bird anywhere. What this means is that frigatebirds can glide for days on end.

Another way to tell the birds apart is by the sound that they make. A magnificent frigate bird makes a sound which is similar to drumming, while a great frigate bird’s sound can be likened to the gobbling that a turkey makes. 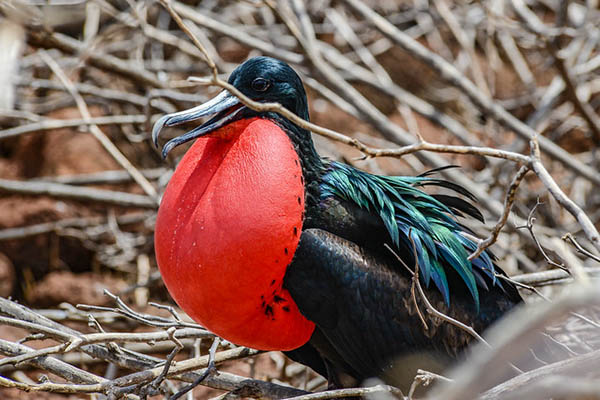 Frigatebirds mostly eat a variety of sea food. They will eat crabs, squid, jellyfish and other types of fish. They have also been observed taking away food from the mouths of other birds! They have also been seen, on occasion, eating seabird chicks out of the nests of other birds. What is more, frigate birds will grab other birds by their tails and shake them until the food they have eaten is regurgitated, and then they will eat that. As a result of this behavior they have been nicknamed “pirate birds” by the Spanish.

Since frigatebirds do not have any waterproofing in their feathers, they do not spend any time in the water, and they do not dive for fish. Rather, they will skim fish from the surface of the water.

One interesting feature of the frigatebird’s behavior is the way that it goes about attracting a mate. The male of the species has a thin red sac on its throat. During the time when breeding is about to start, the male will inflate this sac, and it has the appearance of a bright red balloon attached to the front of the bird. This is quite a sight and can be seen from a distance. This look is further enhanced by a squawking noise that the male will make to attract females, and the male points the pouch at the sky to attract overhead females. Once a female is interested, it will land alongside the male, and the male places his wings around her, to keep other males away. When they mate, one egg is laid. This is placed into a nest that is comprised of several twigs. The birds nest near to the shore, and within shrubland. The bird will stay with its parents for a year, but it can fly after a period of about five months. The frigatebird only mates every other year.

Where to see the Galapagos Frigate Bird

Frigatebirds can be seen in several places in the Galapagos Islands and they are present all year around. This means that you have a good chance of seeing at least one of these species. If you take a Galapagos Islands cruise you may well see magnificent frigatebirds up in the air following your boat. Great frigatebirds usually head further out to sea to feed. It is also possible to see breeding colonies of frigatebirds on various islands. These include on North Seymour Island, Floreana Island, San Cristobal Island, and Genovesa Island. North Seymour Island is usually a particularly good bet for spotting the magnificent frigatebird, while the great frigatebird is more likely to be viewed on outlying islands.

If you are interested in seeing frigatebirds on your Galapagos Islands cruise or land-based Galapagos trip, let us know and we can plan the best route and activities according to your needs, some of our favorite cruises that offer plenty of chances to see frigate birds as part of their itineraries include the Infinity yacht and the Endemic Galapagos cruise. Contact us to find out more. 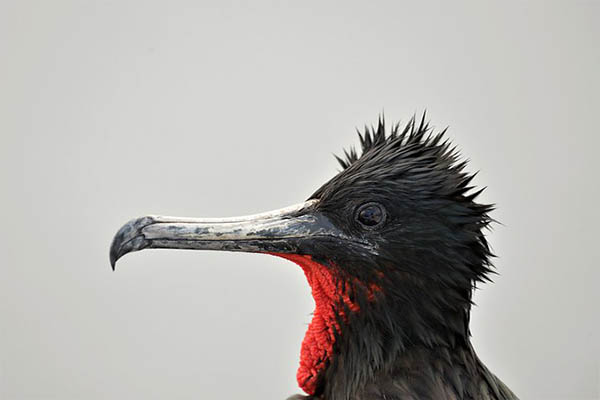