Blue footed boobies are birds that live in flocks and have a life expectancy of approximately 17 years in the wild. They weigh approximately 3.25 pounds and they have a wingspan that extends for 32 to 34 inches, or in other words, nearly 5 ft. They are not a creature that is facing extinction, and in fact are rated as “least concern” due to the fact that their population is considered relatively stable. Blue footed boobies have brown wings, a dark beak, a white chest and a mottled white and brown head and neck. They are mostly characterized by their bright blue feet. It would be an unusual on a Galapagos Islands Cruise or Galapagos land-based trip if you did not get to see one of these birds. 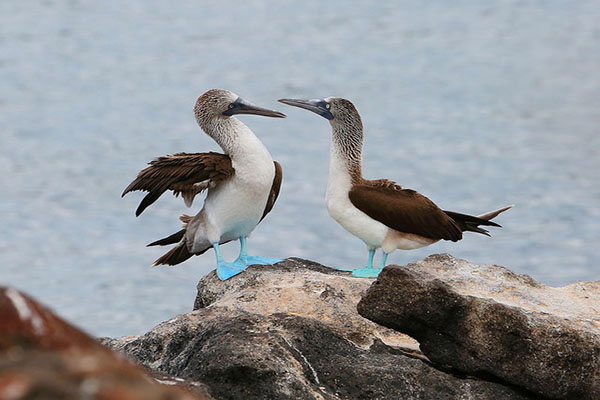 Why do blue footed boobies have bright blue feet?

The bright blue feet that blue footed boobies have comes about as a result of carotenoid pigments. These occur due to the bird’s nutrition, and its diet is comprised of fresh fish. The blue within the feet is important as it is attractive to a mate. This is because blue footed boobies that have a good, healthy diet have feet that are more colored than those that do not. For other blue footed boobies this is an indicator of health, and prospective mates are considered based on the blueness of their feet!

One of the highlights of a Galapagos Islands cruise or Galapagos land-based trip for some, is observing the mating dance of blue footed boobies. This dance is important as it allows the males to demonstrate their fine, blue feet to possible mates. The best time to observe this ritual dance is between June and August, which is typically mating season. The ritual commences with the male offering the female a small object such as a stone or stick. The male then tips his beak, wing tips and tail towards the sky and makes a whistling noise, parading around the female using large steps to show off the feet. Once the male attracts and secures a female, it is common that blue footed boobies mate for life. 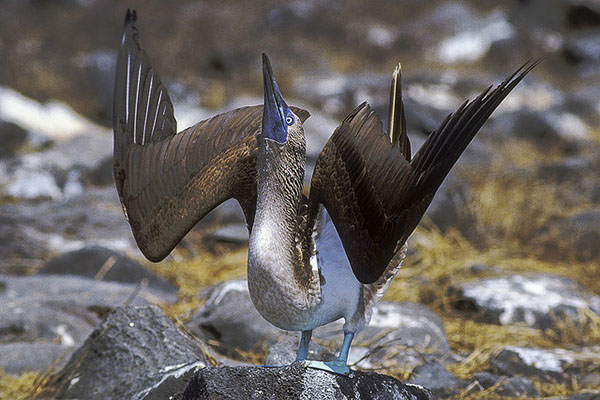 Blue footed boobies feed on fish, and they are known to be excellent divers. They tend to prefer small fish and they hunt for schools of sardines or anchovies, among others. They are able to dive from a height of 80 feet, but they can also perform a sitting dive, allowing them various options to catch their prey. They may sometimes hunt in groups, and sometimes alone, but they generally start looking for their prey when day breaks, returning to the land to roost at night. Boobies move better in the air than on the land. It is believed that the name “booby” comes from the Spanish word “bobo” which means stupid. This may have been due to their somewhat clumsy appearance when moving around on land.

Aside from the remarkable blue footed booby mating dance, there are other behaviors that are interesting in the blue footed booby. Blue footed boobies in Galapagos do not build nests as other birds do. Rather, they lay their eggs simply on the ground, and they create a circle of excrement around the eggs so that other birds know that this is their territory. The female will lay between one and three eggs, and the parents take turns to nurture the young. Blue footed boobies in the Galapagos Islands also use their bright blue feet to keep their eggs warm. They do this for approximately four weeks to keep the eggs warm and insulated. The blue feet are good for this because they have a bigger blood supply during this time and up to a month after the eggs have hatched, so that the chicks can be kept warm. 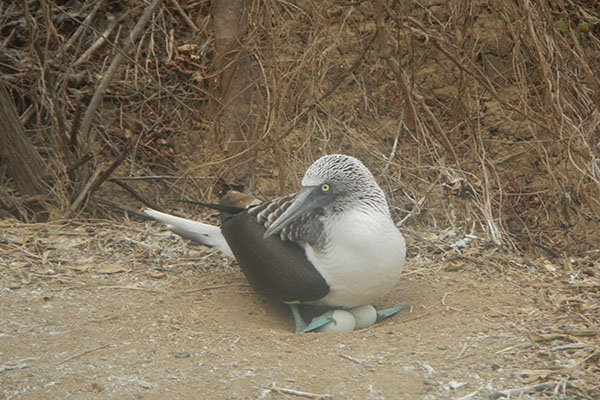 Where to see blue footed boobies in the Galapagos Islands

If on a Galapagos Islands cruise, there are plenty of places where blue footed boobies can be observed. One of the most optimal is North Seymour, and this is also a good place to observe the mating dance, as there is a large breeding ground there. However, there are also possibilities to see them at breeding grounds on other Galapagos Islands. These include Espanola, Fernandina, Floreana, Isabela, Pinzon and, for those Galapagos land-based visitors, on Santa Cruz Island. 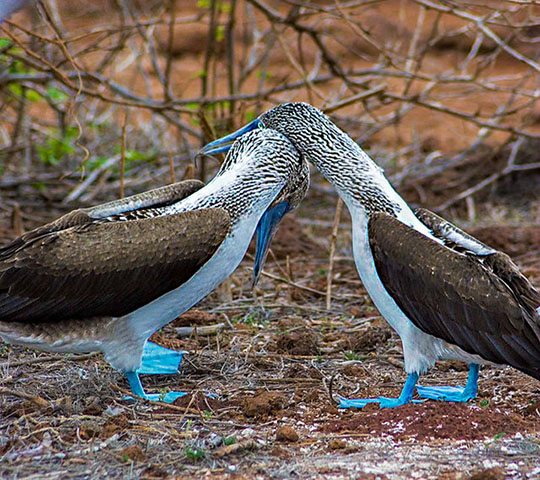