A common question that visitors to the Galapagos Islands have is regarding which month is the best to visit during. The answer to this question is difficult because there are highlights in the Galapagos in every month. Galapagos Islands in February is different from Galapagos in other months. Each month has benefits and drawbacks. In some months you will see some animals and birds, but not others, and so you will likely always take a risk of not seeing some animals and birds – this is the nature of the Galapagos Islands, since creatures migrate in and out depending on the season and their specific lifecycle.  Below we will elaborate on what you can expect from February in Galapagos. This will help you with trip planning, so that you can determine whether February in Galapagos is the right month for your visit, to assist you in choosing the right Galapagos Islands cruise or Galapagos land-based option. We will consider aspects such as weather, wildlife and activities to help you make the best choice for you.

February is in the wet season in the Galapagos Islands. This is a month when rainfall is likely to be relatively high - though you may still only get rain at some points in the day, and not all-day long. Rainfall averages at around two inches during February. The water temperature is cool by tropic standards and is insufficient to maintain coral around the islands, but nonetheless is still relatively warm at 26 degrees Celsius or 79 degrees Fahrenheit. Average maximum temperatures are 86 degrees Fahrenheit or 30 degrees Celsius, while average minimum temperatures are 75 degrees Fahrenheit or 24 degrees Celsius. While this is warm, it might not feel that warm with the breezes on the boat as you move from island to island, so it is worth bringing a couple of warm layers for these times. On the other hand, it can feel quite humid in on the Galapagos Islands in February so this might be a factor that some might want to consider when selecting a time for their Galapagos Islands cruise or Galapagos land-based option. 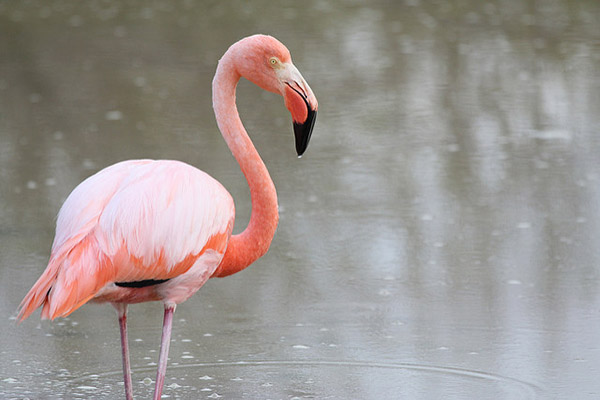 February is a good month for seeing some types of birds and observing interesting phases of their reproductive cycles in the Galapagos Islands. One highlight of February in Galapagos is the chance to see greater flamingos as they begin nesting on Floreana Island. This is the optimal month for nesting of the Galapagos dove, and it reaches its pinnacle during February in Galapagos. On the other hand, the Nazca boobies on Espanola will be coming to the end of their nesting season. At the other end of the lifecycle, black-tailed pintails will start their breeding season in February.

For those that want to see penguins, these return in February to the waters around Isabela and Fernandina Islands. However, it is also worth noting that there is a lower chance of seeing penguins at Bartolome Island in February, as during this month as they head back to cooler waters further west in the Galapagos Islands.

Having started their reproductive cycle in January, one highlight in February among the animals is seeing the marine iguanas as they start their nesting on Santa Cruz island. Turtles also nest during the month of February, so there is a good opportunity to observe this.

On the flip side, waved albatross are not present on the islands in February. They migrate back to Espanola Island for nesting in April and are generally absent between January and their arrival back in April.

Activities in the Galapagos in February

Most activities in the Galapagos are equally as enjoyable all year around. Whatever month you go there is still great birdwatching, and good wildlife observation, as well as the chance for lovely walks on the islands. However, February is known as being a good month for both snorkeling and scuba diving, a very good cruise option we recommend considering for trips in February is the Grand Majestic Galapagos yacht which includes in its itineraries visits to important sites of the islands where a huge a array of wildlife can be observed. The advantage of this month is that the sea temperature is warmer, and the water is relatively clear. In particular, the sea is usually warmer in the afternoons, making this an excellent time of the day for snorkeling in February in Galapagos.

February in the Galapagos Islands is in no way considered the high season, so in general, demand to travel in this month is likely to be lower, and costs lower too as a result of this reduced demand. This might be a good month to pick up a slightly cheaper Galapagos Islands cruise or Galapagos land-based option – though trips to the Galapagos Islands are never likely to be cheap. There is one exception to this lower demand and that is around Carnival. Carnival is a holiday that falls right before Lent in Ecuador and other Latin American countries, and it often falls in February. This is a period when those living in Latin America may be more likely to travel. As with Easter, the dates of Carnival vary each year, as the two are linked. It may be worth checking out when Carnival is before booking a Galapagos trip in February, to avoid this long weekend. Another time in February when demand can be higher is around St Valentines Day, so you might want to avoid dates around this celebration.

A visit to the Galapagos Islands in February may be a very good idea, depending on your priorities. If you are willing to compromise on a couple of hours rain and some humidity on some days of your trip, for the sake of having warmer waters for snorkelling and SCUBA diving, then February in Galapagos may be the right month for your Galapagos Islands cruise or Galapagos land based option. If you want to see waved albatross, this is a month to avoid the Galapagos, but on the other hand, there are still plenty of other birds and animals to observe, and February is a great month for seeing different stages of nesting in various birds. February in Galapagos may also be a smart month to visit from a financial perspective, provided you avoid the busier times where there may be higher demand, such as during Carnival or over the period around St Valentine’s Day.

If you will not be traveling to the Galapagos in February, do make sure to check our series of other very helpful articles on the best time to visit Galapagos, contact our team of local experts and inquire about the best seasons for your particular case.