The island is 23 square miles in size, and it is relatively flat. In fact, its highest point only just reaches 675 feet. Due to its fairly flat landscape, it tends to have a rather dry climate. The island is actually a shield volcano. This was developed as part of a caldera in the middle of the island.

Espanola Island highlights are plentiful. Gardner Bay (Bahia Gardner) is one of these. Gardner Bay has a lovely bit white sand beach, which on your visit you will no doubt get to share with a range of sea lions of all sizes. Everyone likes a bit of sun bathing on a warm day! To cool off you can grab some snorkeling gear from your Galapagos cruise and float around in the water observing the pretty colorful fish in the depths below. Gardner Bay is renowned as being a lovely place all around to chill out and enjoy the relaxing Galapagos Islands ambiance. If you’re visiting Gardner Bay you can expect a wet landing, but don’t worry, it is pretty easy. There is the possibility to undertake a very short hike of 0.6 miles (1km) in this location as well. It is important to know which areas of Española island your cruise tour will visit, one of the cruises that covers all the visitor sites of Española is Cormorant Yacht, which is a very well-recommended luxury cruise for your visit to this island and others.

Suarez Point (Punta Suarez) is another lovely Espanola Island highlight. Perhaps one of the best parts of a Galapagos Islands cruise when on this island is watching the massive waved albatross use the cliff as a run way, propelling themselves off into the sky to take off by jumping off the cliff. Another fabulous feature in this location is the stunning blowhole which shoots water up into the air. Punta Suarez is an important highlight for bird watchers. This is a great spot to observe a variety of different birdlife on this island. Suarez Point is accessed by boat and then on foot. There is a dry landing which can be a bit tricky, and then this is usually followed by a hike of 1.9 miles (3 kilometers) to reach the point.

Of course, one of the key wildlife highlights of visiting this island is the opportunity to see the waved albatross. Espanola Island Galapagos is a particularly good spot to see them as nearly the whole global population of waved albatross comes to this island to breed every year. There’s more on that below. 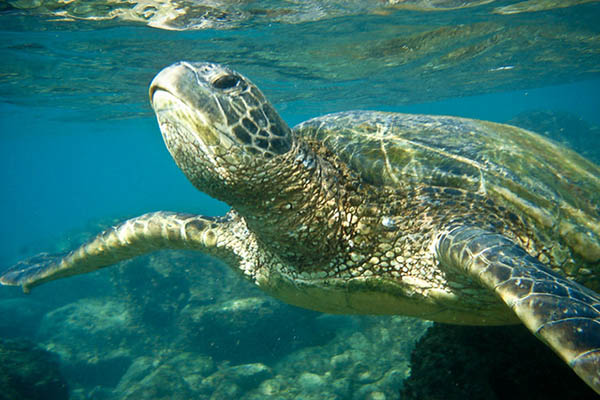 In terms of weather, there is no particular best time to go to Espanola Island. The weather tends to be rather dry most of the year around. That said, for snorkeling off the island, the waters are warmer between January and April.

However, many visit Espanola Island because they want to see the magnificent waved albatross. You are most likely to get to see this fascinating bird during the months of April and December, as between January and March they are mostly gone. The birds do start to return in March, so you may see one or two then, and some leave late, so you might get to see them in January, but for a more likely sighting it needs to be April to September.

Given that Espanola Island is fairly remote, it is very interesting to visit due to the range of endemic species. Some of these include the waved albatross already mentioned, but also the Espanola lava lizard, and the Espanola mocking bird.

The bird life on the island is really rather remarkable. Aside from the waved albatross, there are blue footed boobies and Nazca boobies to be found on Espanola Island. Other Espanola Island wildlife includes red-billed tropic birds, the Galapagos hawk, and sea lions. If you are on a Galapagos Islands cruise, you may even be extremely lucky and get to see whales on the trip over to the island. Humpback whales are in the waters around the islands mostly between June and October, during the peak of the dry season. Not every visitor will get to enjoy watching these amazing, graceful beasts, so you can feel both smug and grateful if you’re one of the lucky ones.

While you won’t necessarily see them when, an important feature of Espanola Island wildlife is the Espanola giant tortoise. Back in the swinging 60s there were just a handful of individuals left. However, through careful and painstaking conservation efforts, with scientists and the Charles Darwin Foundation working together with the Galapagos National Park, almost 2,000 individuals are now living on Espanola Island. 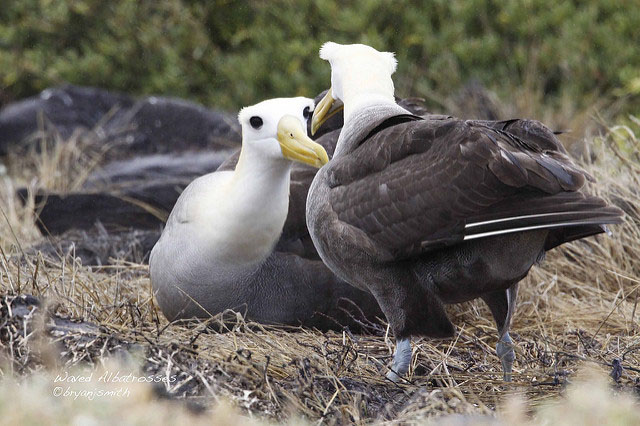