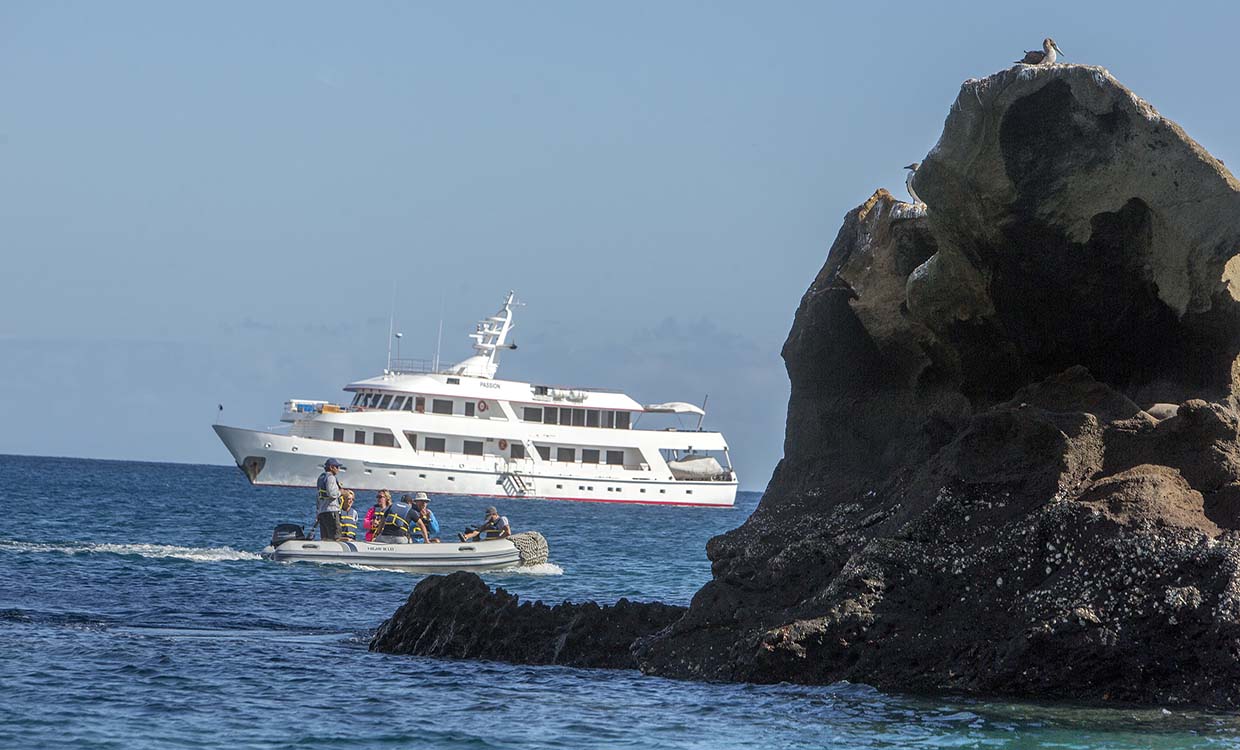 An 8-day Cruise on board of a Galapagos Luxury Yacht

Sea Currents in the Galapagos Islands

At Ecuador and Galapagos Insiders we frequently find that visitors planning to take a Galapagos Islands cruise have lots of questions about what it will be like. Recently, our team member Alexandra took a trip on the Passion Luxury Yacht, a luxury boat. She agreed to tell us everything about how her trip went. Alexandra’s trip was an eight-day itinerary of the Western Islands.

On the first day we were picked up from the airport by a friendly representative of the crew, and we travelled by bus to the port at Puerto Ayora, on Santa Cruz Island to board our yacht. I was delighted to see wildlife on this very first journey, particularly when we arrived at the port. Frigate birds were soaring far above us in the sky overhead, while a couple of lazy sea lions were sleeping on the dock. We also saw a pelican chilling out on a post. I immediately felt as if I’d arrived! I was a bit worried about being on a boat for a week, but once I stepped aboard the Passion Yacht, my fears were allayed. It was comfortable and tastefully decorated, and there was more space than I imagined. After a delicious lunch, our naturalist guide spent some time explaining what to expect in the week ahead, and there was time to ask questions. I felt more relaxed after that.

In the afternoon we visited the Charles Darwin Visitor Center. I was sad to learn that the tortoise Lonesome George, the last of his species had died, but there were other giant tortoises and babies to see, as well as land iguanas. I am glad that my trip included this visit first, as it set me up with more of an idea of what to expect on the islands.

I had been very concerned about sleeping on the yacht, but in the morning when I woke up for breakfast, we were already at our next destination – Floreana Island. The bed was comfortable, and the sailing did not stop me from falling into a deep restful sleep. After a tasty breakfast we boarded the panga (dinghy) and made a visit to Cormorant Point. I had been worried about the landings (both wet and dry!) but our crew was helpful and kind, and no one had any problems. I was intrigued by the green colored beach, and the contrast with the bright pink flamingos in the lagoon behind was incredible. After this visit we went for our first snorkel at Devil’s Crown. This is one of the best spots for snorkeling in the islands, I learned later. I soon got over the fact that the water felt a bit chilly, when I spotted a sea turtle swimming below! The experience was like being inside a tropical fish tank, and I also saw sharks and some pretty little colorful fishes. Later still, we visited Post Office Bay, after which I had a very relaxing long soak in the hot tub before dinner… perfect! 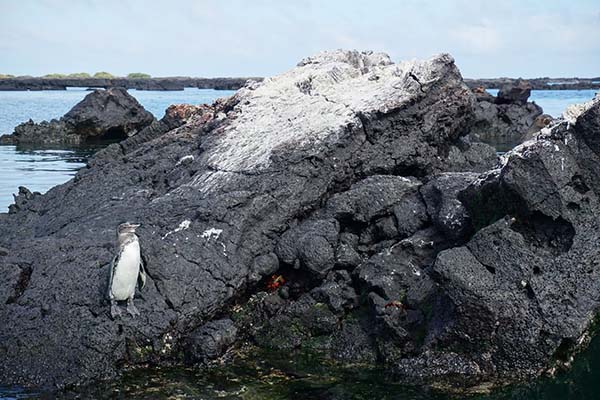 In the morning we remained on Floreana Island for a visit to Asilo de la Paz to learn more about the history, including an intriguing tale of murder and intrigue among early settlers here. On the afternoon of day three, we left Floreana and set sail for our next port of call, Isabela Island. I’ll admit I had been very anxious about the rocking of the boat. I’d bought sea sickness tablets and a bracelet to wear on my wrist to help with this. Maybe the bracelet did work, as I didn’t need the pills. I focused on the horizon and had no problems, even when it did get a little choppy. It helped that a dolphin followed us for a short distance, and our naturalist guide pointed out a lot of interesting features and wildlife along the way.

Isabela Island and Fernandina Island, the far Western Islands were our playground for the next few days. Starting with Isabela Island we went to Moreno Point, where I photographed some fantastic shots of birdlife among the interesting lava formations. I spotted a Galapagos penguin, the smallest type of penguin, which was very exciting, while at Elizabeth Bay. Later, at Urbina Bay, the landscape was a major highlight, and I learned a lot about how volcanic activity affected the coral here. There was a giant tortoise crashing around slightly off the trail, and several land iguanas darting around.

Moving on, the next day at Tagus Bay we saw one of the birds I was really hoping to see on my trip, the fascinating flightless cormorant. We were also taken for a guided walk with some stunning cliff views. I’m not very fit and I was worried I wouldn’t be able to keep up on the walks, but all of the walks were easy, even for someone like me. In the afternoon we visited Espinosa Point on Fernandina Island, where I photographed Darwin Lake, named after the great man. 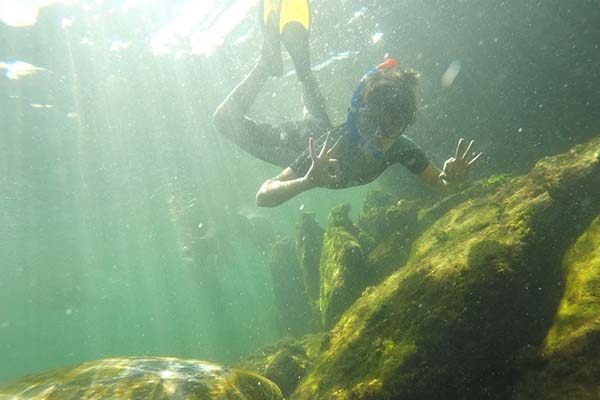 The next day we visited various points on Santiago Island. By this point we were all very well versed with the routine of being aboard the boat. Early coffee before the first visitor site at Puerto Egas, and a lovely walk along the beach. Back for breakfast and a sail to Buccaneer Cove – where we saw graffiti by pirates! Fur seals and rays were also a feature of today’s trip. While I had heard that a Galapagos cruise can pack in quite a lot, I had been delighted to discover there was plenty of time for relaxation on the boat.

I felt sad on the final morning that my Galapagos Islands adventure was coming to an end However, this last morning was one of the best highlights for me, as we spent it on North Seymour Island, a bird-lover’s paradise. Our final sendoff was a courtship dance performed by a male blue footed booby. Fantastic. 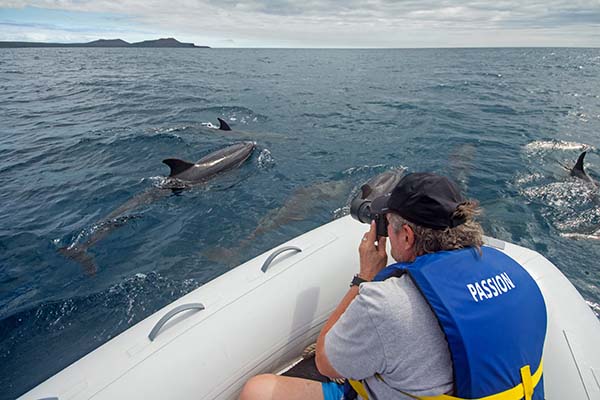 I would thoroughly recommend my trip on the Passion Yacht, as it was a luxury Galapagos experience, with first class staff and a well-trained naturalist guide. Every aspect of the design had been well thought out for maximum comfort. Contact Ecuador and Galapagos Insiders, experts in Galapagos Islands cruises, to find out more about this and other Galapagos Islands cruises or land-based trips to enjoy.